Tsushima is an island city between Japan and Korea, but so close to Korea you don’t have to be Sarah Palin to see it. There are a few observation points where you can see Korea on a clear day. The island is still something like 80% forested, and largely old growth forest, so it looks ideal for just walking, trekking or hiking. I was only there for one night more than twenty years ago, so I haven’t really seen it, but I went to a promotional event the other day and that really made me want to visit for about a week. If I had the recumbent bicycle of my dreams, I think I’d go to either the port on the north end of the island and ride south to the port at the other end of the island, or the other way round. It’s about 82 kilometers all the way which I think is just a training run for a tri-athlete. A week for me should be just about right.

Walking is the main thing I’d want to do on Tsushima, but there is something there for people who like cycling, Japanese history, military forts, rare animals, beaches, and eating fish, veggies and noodles.There is a place where you can try making soba noodles and there’s a program where you can stay at a regular family’s house and experience Japanese life. At the promotion event I ate anago cooked a few ways, squid and some kind of shellfish (now I know that it was sazae), and they were all great. Mr.Oishi grows a few kinds of tea which he let me sample brewed two ways, the usual style and cold brewed. Both were delicious. He was working with Ms.Honda, who specializes in tea and scents, promoting tea and Sunset Soda made by Mr.Oishi’s friend. I recommend a Sunset Soda float when you’re on the island. We hope we can get Ms.Honda to write a post for Japan Eight someday. Another Oishi san, a really nice woman, was selling mushrooms and squid. Island people, especially from an island which is a national border can be reticent, but I promise any effort you make to talk to people will be rewarded with warmth and friendliness.

The island city has six parts which were individual towns until 2004. From the southern end of the island Izuhara hosts the port and several samurai era houses from when the Mongols were raiding and Kaneishi castle overlooked the town. Gamers should think about Izuhara when they play 2018’s hit game Ghost of Tsushima. Squid fishermen use lights to attract the squid and I’ve always heard that a fleet of squid boats at night is really beautiful. Izuhara is supposed to be a good place for that. There’s also a zen temple that has free meditation if you want to get in a really good mindset before walking around imagining the samurai in their homes.

Mitsushima is where you’ll land if you fly to Tsushima, as it’s where the airport is. Besides that, it also has part of Aso bay, famous for beautiful sunsets, calm waters and a few beautiful beaches. People mentioned the “ria” coastline of Aso bay just as if I understood what they were talking about. Thanks to the encyclopedia, I finally do. When rivers that run into the sea, or a bay, become submerged they leave a kind of funnel shaped inlet and enough of those makes a “ria coastline.” After traipsing around the beaches and historic sites, a dip in the local hot spring should be wonderful. 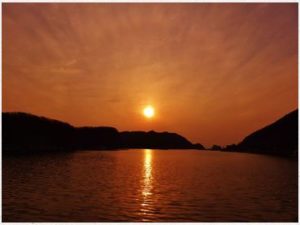 Toyotama is the other part of Tsushima that shares Aso bay. Aside from the beautiful sunsets and more beaches it has Watazumi Shrine, one of the places I definitely plan to see there. Watazumi has five torii gates and two of them are in the water. Pictures look a bit like Miyajima,one of Japan’s most iconic sites (and sights.) 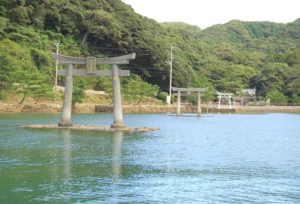 Mine and Toyotama are the middle of Tsushima. Aside from walking all around Mine, I definitely plan to visit Firefly hot spring there.The name in Japanese is Hotaru no Yu (蛍の湯) Hotaru is firefly, no is the possessive, making firefly’s, and yu means hot water and is often used for the name of hot springs. If you’ve never seen fireflies, and even if you have, you’ll be amazed at how beautiful they are.

Kamiagata hosts the Tsushima Wildlife Conservation Center with its emphasis on preserving and studying a number of rare plants and animals, especially the endangered Tsushima leopard cat. The cats exist only on Tsushima.They look like other domestic cats except for vertical stripes on the middle of their foreheads and round,white spots on the back of their ears. They have been designated a national treasure since 1971. Kamiagata also has a large rock that closely resembles the Sphinx, and a sacred mountain (Mt. Mitake) mostly covered with ancient old growth forest.

Kamitsushima is where the northern port is. The “kami” of the name means “upper” in English. Near the port there is a short (1 hour) hiking trail with 88 statues known as the Hitakatsu Pilgrimage. You can get a small sheet of paper at the tourist information center and collect a stamp at each statue. I think if you visit all of the statues your wish will come true; so be careful what you wish for. Japan’s oldest gingko tree, the 1500 year old “Great Ginkgo Tree of Kin” and Momiji Road are things I’d love to see. Momiji is a Japanese maple tree where the leaves are just like maple tree leaves, but much smaller. The colors they turn in autumn are incredibly beautiful.

Most of the information for this post comes from a website called, appropriately enough,Tsushima. It was created in 2011 by Maya, an English speaker who lived on Tsushima until 2014, and some foreign residents of the island. It’s a site I definitely recommend for a much more detailed view of the island complete with a few holiday courses outlined for your convenience. This is from the “contact” page on the site: “Tsushima has beautiful beaches and rivers to swim during summer, and has a lot of mountains to hike and historical ruins to search during winter. Some of them were difficult to find (and dangerous), but I loved the adventure. I recommend this place for those who are seeking great nature, outdoor adventures, history, food, and friendly people.”

Please cut and paste this link into your browser.

the Tsushima website I used the most for this
http://tsushima.weebly.com/

YouTube videos in English
4 Americans’ trip, about 8 minutes. I watch with the sound off.


A really well informed cyclist. The first half is Iki and Tsushima islands and the second half Kyushu island. There’s sparse narration and great views, about 20 minutes long.

Hi. This is GOTOyan. I am painting Arbores with black ink. I will hold an exhibition in Yufuin(Oita) in November, so I...

When you come to Kyushu (especially Fukuoka, and soon we hope !) be sure to save a day or two for Nagasaki. It's just ab...

Fukuoka is getting a lot of attention?!