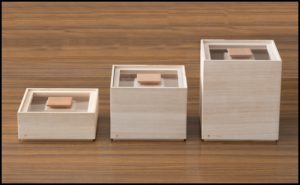 Paulownia wood has been used for centuries in Asia. Because it’s a natural insect repellent and desiccant, it’s been used in Japan for dressers and clothes storage and rice storage since ancient days. It also is conveniently light weight and has very few knots, making it very easy to work with. Paulownia was named after Queen Anna Pavlovna of Russia (1795-1865), so it’s also royal and is sometimes called Royal Paulownia or Princess Tree.

Another use for paulownia is wooden boxes for all sorts of different things. A few weeks ago I got to visit the Masuda Kiribako Shop located near Fukuoka City in Koga City. Masuda (増田) is a Japanese family name. Kiri (桐) means paulownia and bako (箱) is box. The Masuda Kiribako Shop is really a factory that makes a large variety of paulownia boxes for everything from gifts to pottery to food storage. Considering the tradition, craftsmanship and potential for innovation and collaboration that Masuda has, we hope it will eventually be listed on Takumi, Japan Eight’s sister site. We certainly wish them the best and hope to be their customer and collaborator at the very least.

Founded in 1929 by the current president’s great grandfather, the company originally made boxes for Hakata Dolls, so it met two of Takumi’s criteria (tradition and collaboration with other artisans) long before there was a Takumi. The development of a complete vertical integration, from getting the logs to producing the boxes to finishing and shipping, allows Masuda to not only mass produce craftsman quality boxes, but to also make single, unique boxes according to the customer’s needs.

Almost ninety years of specializing in paulownia boxes give the company an expertise I’m sure few other manufacturers can match. Hirofumi Fujii, the current president, says Masuda’s strength is in its unique knowledge of paulownia and experience with production techniques related to paulownia, and that he plans to stick with that as the company’s base. Despite producing some five thousand boxes a day, finish work is still done by hand. I know from seeing boxes in the company’s showroom that the lid on the box will fit snugly no matter which way it’s turned, even for polygon shaped boxes. 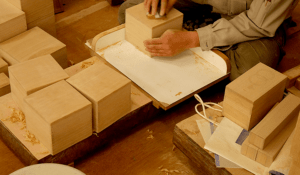 Moving into foreign markets has also shown that something used in Japan for one thing can easily be repurposed for another, something we’re particularly interested in here at Japan Eight. Rice storage boxes from Japan are being used for cereals and nuts and pasta depending on the country they are shipped to. Boxes once used for Hakata Dolls are now elegant gift boxes and I imagine more than one is on some executive’s desk holding sundries, like a match collection. The boxes can also be colored and have custom logos. If I were rich, and I hope I will be someday, I’d like to work with Masuda to make a special set of boxes for my desk to hold pens and paper and the like. I hope I get rich enough to buy a desk someday, too.

We hope you’ll be able to order Masuda boxes through Takumi someday. This is the link to their website in Japanese. http://www.kiribako.jp/index.html

Ikkanbari, one of quite unique traditional techniques in Japan

One of my friends showed me a unique bag which was covered with kimono cloth and washi. That was my first encounter with Ikkanbari. Listening how it was made got me more curious about Ikkanbari. So I decided to visit and see it myself.

Before I knew it, I was going for a textile dyeing artist – Sarasa Kino

Sarasa Kino is a young textile dyeing artist. I had a chance to sit with her and ask many questions. I hope you enjoy it as I did!

I went to get rid of bad luck!

I went to a shrine for Yakubarai. Yakubarai is a ritual to get rid of bad luck.I go to Wakahachimangu shrine to get purified every year after I became freelancer.
Looking back to go forward.
Tsushima