We’ve just finished the Obon holidays here in Japan. The word “Obon” is an abbreviation of the word “urabon” which comes from the Buddhist urabon sutra, in which one of the Buddha’s disciples asks the Buddha how to rescue the soul of his mother from the Land of Hungry Ghosts.”On the 15th day of the 7th month the priests of the ten quarters being gathered together ought to present an offering for the rescue of ancestors during seven generations past, as well as those of the present generation, every kind of choice food and drink, as well as sleeping materials and beds. These should be offered up by the assembled priesthood as though the ancestors themselves were present, by which they shall obtain deliverance from the pains, and be born at once in a condition of happiness in Heaven,” is how the Buddha answered.The 15th day of the 7th month is interpreted as August 15th or July 15th depending on whether the date comes from the lunar calendar or Gregorian calendar.

The capital O is an honorific (please no “honorable bon” Charlie Chan imitations.) In Japanese Obon looks like this お盆 with the お being “O.” The adjective is just “bon” as in bon odori, the traditional dance. Compassion and honor for ancestors is the essence of Obon, and the festival lasts three days, from the 13th to the 15th of August here in Fukuoka.

Mukaeru means to go and get, as in pick someone up from school, and receive, as in guests. The first day of Obon is helping ancestors find their way back home and receiving them. The “bi” of mukaebi means fire. Bonfires and lanterns are lit and incense is used as a path from this world to theirs. Small shrines in homes are decorated with fruits, sweets, flowers, and memorial tablets to make the deceased welcome. Cucumber is meant to symbolize a horse and eggplant a cow and in traditional areas small figures are made of these using wooden chopsticks for legs. The idea is that ancestors will come quickly from the spirit world on a horse and return slowly on cows. 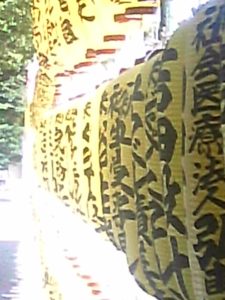 The second day is spent celebrating the ancestors which entails dance and prayer. The traditional Bon Odori (or bon dance) accompanied by drums is often performed on stages which are themselves surrounded by booths featuring treats and games. Another form of celebration is going to a temple or having a priest visit the home to perform houyou and kuyou memorial services. Following the service, family members share a meal and reminisce about their ancestors. The meal is shojin ryori, the kind of meal Zen monks eat.

The last day involves sending the ancestors off (the meaning of okuru — it’s okuri in okuribi to be more euphonic) with more “bi” or fire. Famous okuribi festivals are held in Kyoto and Hiroshima, especially, but happen everywhere. Bonfires are used in Kyoto, and other places involve writing messages on paper lanterns that are then floated in a river or the sea. The fire is meant to light the way back for the dear departed. 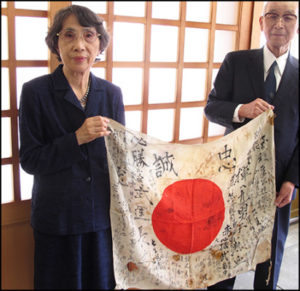 The essence of Obon is compassion and honoring our ancestors and one beautiful example of both is the Obon Society,which helps veterans return battlefield souvenirs to the families of Japanese soldiers. The Japanese flag is called hinomaru which literally translates as “sun’s circle.” Soldiers were often given flags that friends and relatives had written messages on and many soldiers carried these flags into battles. The messages were written horizontally so they appeared to radiate out from the sun. As Japanese was normally written vertically, these flags were known as yosegaki hinomaru due to yosegaki meaning “sideways writing.” The flags were very popular battlefield souvenirs but are still precious to the Japanese families. Obon Society can be found at http://obonsociety.org/ they bring healing to both the people who lost the object that became a souvenir and the veteran who feels compassion and wants to return it.

About 25 years ago a gay friend visited Fukuoka and we couldn't find any gay, well, anything; no clubs, no events, no in...

Hakata is the name of the bay that probably brought people to this area ten thousand, or more, years ago. Hakata is the ...

It’s always hard to separate suspicion from religion and ritual and to know how seriously people take them. In Japan, it...
A Shinto priest talks about the power of words.
natsubate