I guess everyone knows fireworks were invented in China and are said to have been meant to ward off evil spirits. They apparently came to Japan sometime in the 1700’s and have been a big hit ever since. 1733 is the year given for the first fireworks show in Japan with the idea being to hold a memorial for the souls of people who had died during the previous year’s famine and disease and to pray for the eradication of disease. That festival was the precursor of what is now the Sumida River Festival, which is always in the lists of the top ten fireworks festivals in Japan.Fireworks shows are decidedly a summer event and held in probably every city and town. Many people wear traditional clothes called yukata, which you might think of as a summer kimono. They’re usually quite bright and colorful. I’m sure all festivals include food stalls and games for kids, like catching goldfish. There are several festivals here in Fukuoka alone. By the way,the word for festival is matsuri, which you will see used in English descriptions quite often.

The Japanese word for fireworks is hanabi [花火] which translates literally as flower [花 hana] and fire [火 bi.] According to the Japan Hanabi Association, ” Japanese fireworks are known for their exquisite delicacy and rich artistry.” There are three things that make Japanese fireworks unique: ten different shell sizes that are designed to burst at specific heights,the variety of the bloom diameter and the ability of each small charge inside to light and extinguish simultaneously making them seem to appear and disappear magically. The world’s largest single round is made in Japan and is about 48 inches in diameter and weighs about half a ton. It explodes at 2,700 feet and the bloom diameter is said to be near a quarter of a mile. There is only one show that features the big one, the Katakai-Matsuri Festival in Niigata every September. 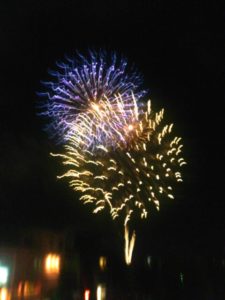 A really big show features 100,000 to 120,000 rounds and must be quite a sight. This year’s Ohori Park festival in Fukuoka had just 6,000 rounds but lasted an hour and was really impressive. This was the 56th annual show held at Ohori Park (it’s every August 1st.) There is also a newcomer at Momochi beach that advertises 12,000 rounds and music. Ohori’s show is free, Momochi’s isn’t. Any tourist site will have up to date information on any number of festivals all summer and into the autumn. Search for the best 15 fireworks festivals in Japan and you’ll get a great list and a bunch of beautiful pictures. If you plan early you can also find a shop that rents yukata and accessories, so you can go in style. Many places still sell small fireworks for families to take to the beach, picnics and barbecues. Don’t be surprised if you hear a lot of pops, bangs and even a kaboom while you’re here. 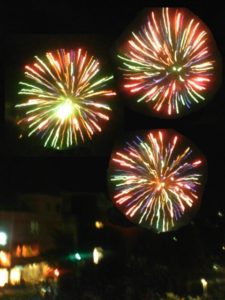 Some people lose their heads over weddings, and no more so than in Japan, where the average ceremony costs around $30,000 U.S.,

Things You Can Do In Japan

The Land of the Rising Sun The word "Japan," for you crossword puzzle and Scrabble fans, is an exonym for the land ...
No Ninjas Needed
Story from a former Shinto priest: About the wedding ceremony.