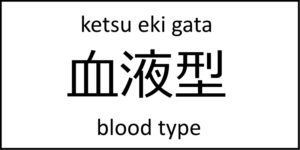 The traits according to Wikipedia are: 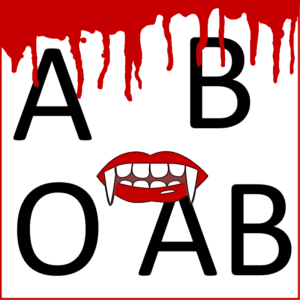 Once you know about your blood type you’ll no doubt want to know what other types you’re compatible with. Fear not ! the answer (which varies a bit website to website) is here provided by Tofugu, a website about all things Japanese.

According to the Celebrity Matchmaking Agency in Tokyo, the matches that are the most likely to result in marriage are:

Though the idea that blood is related to personality was around as far back as Aristotle, it was proposed in Japan in the 1920’s and at first got the interest of the Japanese military, which thought it might be possible to breed perfect soldiers by pairing people with the best blood for fighting. Apparently this was a reaction to the fierce resistance to the Japanese occupation of Taiwan where 40% of the people were thought to have Type O blood (ambitous, strong-willed and ruthless.)

By the late 1930’s, the idea of personality traits being connected to blood types had pretty much been discarded and later scientific studies seem to show that there is no correlation. Even so, in the 1970’s, Masahiko Nomi, an engineer with no medical training, revived the idea in his book Understanding Affinity by Blood Type, a bestseller in 1971. Nomi described the types as analogous to vegetables. O was fresh vegetables, abundant and with many varieties. A are like pickles which retain the characteristics of the vegetables before pickling, whatever that means. Type B are boiled and seasoned vegetables. Like A, they retain the original properties, but may have a different taste after cooking. Both A and B have less variation than O. Type AB are boiled pickles, no wonder they’re so rare, and have the least variation.

Nomi did a number of studies showing, for example, the number of prime ministers with different blood types (79% Type O) and how Type O and B make up the largest number of professional baseball players in Japan and South Korea. Nomi’s son, Toshitaka Nomi, founded the ABO Center which researches blood type humanics. There is a website for this, but it seems to show that Mr. Nomi died in 2003 and doesn’t seem to have articles newer than 2012.

To say that the Nomis had a large influence would be understating it by quite a bit. Today in Japan there are blood type horoscopes and blood type soft drinks, blood type chocolate, blood type movies, TV shows, and anime. The training for individual athletes of Japan’s olympic women’s softball team at the Bejing Olympics was organized by blood type, baseball cards show the players’ blood types, Facebook has a space for blood type on its pages, four books about blood types have reached the top 10 since 2008, and a Japanese cabinet member who was forced to resign over saying something stupid in 2011 used his blood type as his excuse. There are even condoms for the individual blood types called ABOAB condoms, and I’ve read that 2 billion condoms, with advice about love that’s not unlike fortune cookies, are sold each year.

Though mostly a Japanese phenomenon, blood types are also popular in South Korea (and maybe soon in North Korea ?) and in America there’s Eat Right 4 You, a book and website dedicated to the D’Adamo blood type diet. I guess America got a transfusion from Japan. I wonder if vampires have blood types or just like blood types …

Summer in Japan is incredibly muggy (蒸し暑い for Japanese readers) and that leads to what Japanese call natsubate (夏バテ)...

We've just finished the Obon holidays here in Japan. The word "Obon" is an abbreviation of the word "urabon" which comes...

Why Japanese is so difficult

Do a search for the most difficult language to learn and, especially for English speakers, Japanese is at the top. I'm s...
11 Historical places in Hakata, Fukuoka
Japanese White Weddings