So why is Hakata just a ward of the city called Fukuoka ? 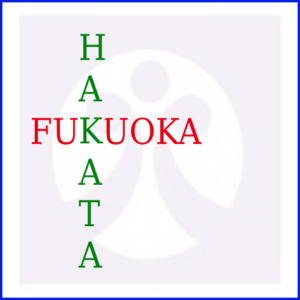 In a word, samurai. Hakata and Fukuoka were cities on the east and west side, respectively, of the Naka river until 1889 when the two cities merged. Fukuoka, on the west side of the river, was home to the federal government from very early in Japanese history when diplomats from Asia would leave their retinues there while traveling to meet local administrators or even the Emperor. During the samurai era, Fukuoka Castle was built there and gave the city its name (I believe it was Fukusaki until then.) Hakata, on the east side, was home to merchants, artisans, entertainment, and religion, not unlike today. It also had residents from China and Korea whose influence lasts even now. The legend is that in 1889 when the cities were merged a meeting was held to determine the name of the new city and Hakata was the clear winner until samurai from Fukuoka crashed the meeting and demanded Fukuoka be adopted. Arguing with a samurai wasn’t an option in those days and so Fukuoka is now the name of the city and Hakata the name of one of its wards. Hakata is still the name of the most important cultural assets of the area, however, and is the place where they are preserved, including the graves of many samurai and their feudal lords.

The image at the top is how most people probably view Fukuoka and Hakata. The background is the Fukuoka City logo. The bottom image is maybe more accurate, culturally, and has the Hakata Ward logo as background.

Things You Can Do In Japan

About 25 years ago a gay friend visited Fukuoka and we couldn't find any gay, well, anything; no clubs, no events, no in...

Summer in Japan is incredibly muggy (蒸し暑い for Japanese readers) and that leads to what Japanese call natsubate (夏バテ)...
A better way to rehydrate dried shiitake mushrooms!
Fukuoka is getting a lot of attention?!