About 25 years ago a gay friend visited Fukuoka and we couldn’t find any gay, well, anything; no clubs, no events, no information, and no people. So I was really glad when I stumbled on the Kyushu Rainbow Pride event on Sunday, November 4th. I was also happy to discover that there was a parade, there is a website and a Facebook page, and Fukuoka city officially supports Rainbow Pride.

I believe this is the third year for Rainbow Pride in Fukuoka and it included a reception party the night before, attended by the mayor, and a parade, a park full of booths and games for kids, a stage with a full day of performances, and a film festival. My favorite things were that the motto this year was “for all the children of the future,” and all the family members with signs that said “be yourself.” 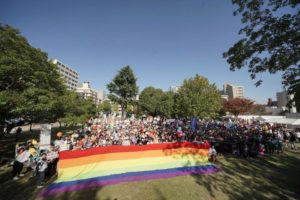 a big parade and about 7,000 people at the park

The LGBT+ community is now officially welcomed by the city and prefecture governments. Fukuoka city added a rainbow colored logo to its homepage — too bad it isn’t rainbow colored all the time. Since 2018, the city accepts same sex partnerships which means same sex couples can be treated as married couples for public housing and at municipal hospitals. Full legal rights are still not given, but should be.

this could be the city logo all the time, couldn’t it ?

I haven’t found any websites in English for people who are LGBT+ here. If you’re coming to Japan, TravelGay.com has a few bars listed in Fukuoka, but they’re all gay cruise bars. If you have Japanese friends, they can check sites like Rainbow Soup https://rainbowsoup.net/ and the Kyushu Rainbow Pride Facebook page. https://www.facebook.com/qrp4lgbt

Japan: The Big Picture The White House couldn’t receive a tsunami of mail, a big storm in the Pacific wouldn’t be a typ...

Why did you come to Japan ? I’ve always blamed Pam Horino and her sisters, Nikki Saito and JoAnne Otsuki. I admit th...

It’s always hard to separate suspicion from religion and ritual and to know how seriously people take them. In Japan, it...
Prank Store ???
Why Japanese is so difficult